We came together last week for the This Too Is Idaho public campaign and rally highlighting the many different pathways toward change; including domestic and sexual violence programs across the state to regional and state-level disability rights organizations to organizations dedicated to undoing racism, homophobia, transphobia, anti-immigrant and anti-refugee sentiment advocating for our human rights –for all Idahoans who deeply care about our people and our communities.There have been several recent state and national media reports of violence in Idaho – high school football players racially abusing and raping their teammate who has a developmental disability, college football players sexually assaulting a young woman, men targeting and killing a gay man, and a young man charged with a domestic violence-related homicide. We understood that these are not unrelated acts of violence; but are connected by a singular truth that our society encourages us to take power from others based our identities – gender, race, ability, sexual orientation, class, religion, immigrant and refugee status.

Mel Leviton, the Executive Director with the Idaho State Independent Living Council spoke about the lived experience as an individual with a disability, and how she has been recently afraid to advocate for her rights – even for a parking space. Jeff Matsushita spoke about hyper-masculinity and how he finds hope when men model love, compassion and tenderness. Fatima Tall spoke about how the single narrative of hate has yet again taken over our Idaho home, and asked that we listen to the unheard stories and voices of our state then bring hope and peace back to our Idaho.

Representative Melissa Wintrow committed to do everything in her power with her privilege as a white, middle class, able-bodied, cis woman to promote fairness, equity, and freedom and to challenge our binary system that places the wide diversity of our human experience into distinct categories and dismisses the entire range of our humanity. Senator Cherie Buckner-Webb spoke about our interconnectedness to one another as human beings, our own and each other’s humanity and powerfully called on each one of us to action.

Our call to action is clear.

Whole people and whole communities are possible. Love over violence is possible. This too is Idaho.

Reminder that shipping for all material orders made by Programs on the Idaho Coalition website store is FREE of cost, please use the following coupon for all orders. 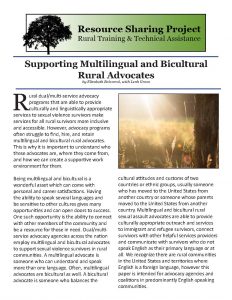 appropriate services to individuals who are sexual violence make services for all rural survivors more inclusive and accessible. Multilingual and bicultural advocates are an important part of rural agencies being able to provide these culturally and linguistically appropriate services.

Stanford University swimmer Brock Turner was arrested in January 2015 for raping an unconscious woman outside a fraternity house. He was convicted of multiple felonies including assault with 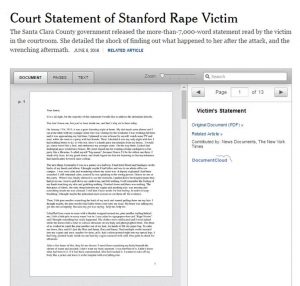 attempt to rape. Instead of receiving the recommended six years in prison, the judge sentenced Turner to a mere six months in county jail.

The media has exploded with commentary regarding the sentence. The groundwork for the sentencing focused on Turner’s life being ruined by being sentenced to prison and ruining his potential swimming career, instead of focusing on the impact the assault had on the individual who was raped by Turner. In a victim impact statement, she said: “You took away my worth, my privacy, my energy, my time, my safety, my intimacy, my confidence, my own voice, until today.”

As advocates against violence, we feel those words in our core. Our souls ache for the countless number of individuals we have worked with who have experienced these same feelings. We’ve shaken our heads in disbelief at the injustices of the criminal justice system; a system that is a reflection of our society as a larger whole. A society that questions what SHE did or the “bad choices she made” instead of reflecting on the impact and intention of the offender. As a society we often reflect this rape culture. We value and idolize roles of masculinity that are based in power and aggression. Individuals who are sexually assaulted live and breathe this very culture. They internalize these ideas and after an assault, immediately begin to blame themselves and question what they could have done differently.

We have to believe that this culture can change. We have to begin to see that our culture needs to value compassion rather than dominance and control. We are not alone in this work. We are a movement of strong, fierce and dedicated individuals who are working tirelessly to end the violence. Our movement is intimately tied to so many other movements, such as the disability movement, the LGBTQ movement, and racial justice advocates, who are also pushing against domination and violence in effort to create liberation. Together we can shift the narrative to reflect the compassion we seek for ourselves and those we work with.

Connecting to Your Whole Self 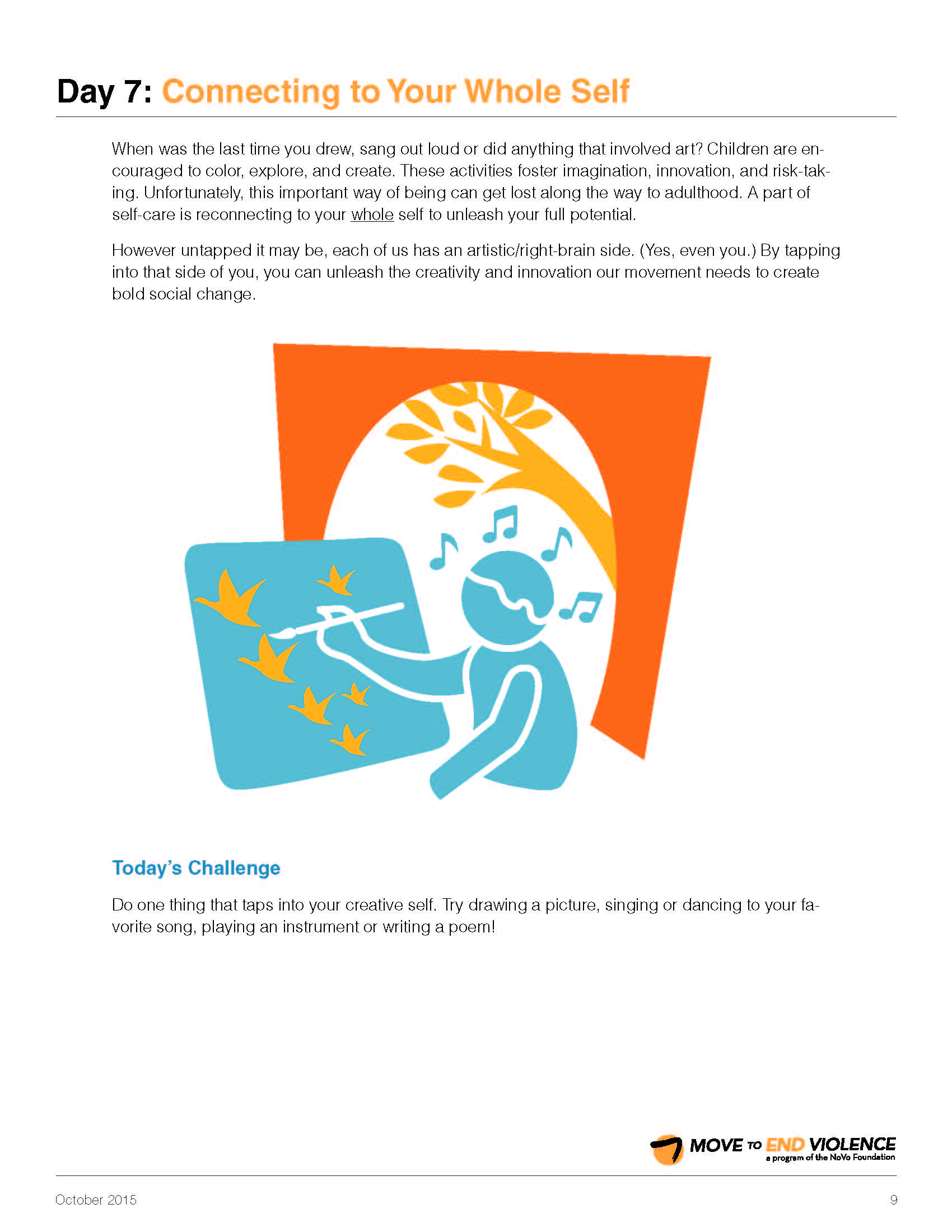 When was the last time you drew, sang out loud or did anything that involved art? Children are encouraged to color, explore, and create. These activities foster imagination, innovation, and risk-taking. Unfortunately, this important way of being can get lost along the way to adulthood. A part of self-care is reconnecting to your whole self to unleash your full potential.

However untapped it may be, each of us has an artistic/right-brain side. (Yes, even you.) By tapping into that side of you, you can unleash the creativity and innovation our movement needs to create bold social change.

Today’s Challenge – Do one thing that taps into your creative self. Try drawing a picture, singing or dancing to your favorite song, playing an instrument or writing a poem!

Save the Date – Building Promising Futures: Guidelines and Outcome Measures for Enhancing Response of Domestic Violence Programs to Children & Youth Webinar
June 21st at 1:00 PT/2:00 MT
This webinar will discuss the guidelines and outcome measures that were developed in part through the Resilient Families Idaho initiative. Presented by Eleanor Lyon, PhD – Institute for Violence Prevention and Reduction and Melissa Ruth, LCPC – Idaho Coalition Against Sexual and Domestic Violence