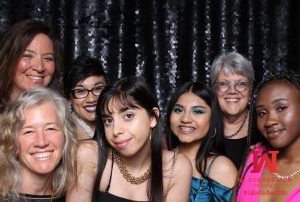 The Ms. Foundation for Women honored the Idaho Coalition Against Sexual & Domestic Violence youth activists along with dream Hampton and Sana Amanat at the 31st annual Gloria Awards: A Salute to Women of Vision, last Wednesday, May 8th, in New York City.

The Gloria Awards, named for Gloria Steinem, one of the organization’s founding mothers, is a yearly celebration to benefit Ms. Foundation grantee partners around the country and to recognize leaders who have made an indelible impact on the gender justice movement at the local, state, and national level.

“We are thrilled to announce the honorees for the 31st Annual Gloria Awards,” said Teresa C. Younger, President and CEO of the Ms. Foundation.“ As the Ms. Foundation celebrates our 45th anniversary, we are proud to honor the leadership, innovation, and courage of this year’s honorees. They represent the many generations, cultures, ethnicities, races, sexual orientations, and identities of women that are leading and impacting the fight of social, political and economic equality for all genders. dream hampton is an incredible activist who has elevated people of color and the LGBTQIA+ community throughout her career to create real change in people’s lives. Sana Amanat is an outspoken advocate, and through her role at Marvel, has contributed to increasing diversity in pop culture and celebrating women and girls of color to change who the world sees as a super hero.”

In addition to Ms. hampton and Ms. Amanat, the Ms. Foundation will honor Idaho Coalition Against Sexual & Domestic Violence youth activists Charlotte Iradukunda, Jessica Hernandez, and Layla Bagwell for the intergenerational organizing efforts to support Christine Blasey Ford, PhD during the Kavanaugh hearings through a Change.org letter that garnered over 117,000 signatures. The three teen activists will receive the Peggy C. Charren Free to Be You and Me Award.

“We are honored to be selected by the Ms. Foundation for our intergenerational organizing efforts to amplify the voices of 15-year-old girls and their experiences of sexual assault,” said Kelly Miller, executive director, Idaho Coalition Against Sexual & Domestic Violence. “An intergenerational group came together – Malia Collins, Jennifer Martinez, Kristen Zimmerman and the three 15-year-old youth activists – and were able to shift the national conversation to make visible the traumatic impact of sexual assault on teenage girls.”

“Dr. Blasey Ford showed us that now is a courageous time and a brave time,” said Charlotte Iradukunda, Idaho Coalition youth activist. “Telling our truths will get us one step closer to the world we want to live in. One where seventeen-year-old boys are taught that it is not okay to exploit girls and fifteen-year-old girls are taught that their bodies are their own.”

The Advocates nonprofit organization helps victims of abuse and sexual assault. A new 18-unit housing project to shelter clients during times of need is nearing completion on River Street in Hailey.

The organization is within $1.4 million of raising the $5.5 million needed to complete two buildings that will provide housing for abuse survivors, their children and pets.

[The] Advocates CEO Tricia Swartling said many families assisted by the organization are waiting nine to 12 months for housing in the valley, while sometimes remaining in dangerous situations, or living in automobiles.

“When they need affordable, private, autonomous housing, it is just not readily available,” Swartling said.

Sometimes people are forced to leave the community in order to find housing, she said.

The project includes a 13,000-square-foot building that includes 12 transitional-housing apartments and a new client services center on River Street in Hailey, scheduled to open in October. Construction on a stand-alone, six-unit apartment building will commence in the fall of 2019 once fundraising goals are met, the organization stated.

The Advocates provides 5,700 nights of shelter and transitional housing for more than 100 women and children annually, yet 29 people are currently on a waitlist for the new housing, the organization stated.

“At 100 percent occupancy, the new apartments will provide at a minimum over 13,000 additional nights of housing a year for at least 36 more people,” a news release states.

The new apartments will also allow The Advocates to provide short-term shelter and transitional housing for men. The Advocates operates the only shelter and subsidized housing program for survivors of abuse in rural central Idaho, serving Blaine, Camas, Custer and Lincoln counties.

The Advocates was founded in 1991 to support a teen victim of sexual abuse. Today, the organization employs 42 people, including 12 high school students as youth activists.

Advocates Against Family Violence to break ground on apartments this month

An early sketch of AAFV’s future four-story apartment building with 30 units in Caldwell.

The groundbreaking will take place at 10 a.m. on May 22 at 1508 Hope Lane in Caldwell. The organization previously received a $1.7 million grant from the Idaho Housing and Finance Association to build the affordable apartments near its main office.

A majority of the units will be offered at below-market rates for residents with lower-than-average incomes, with five units designated as transitional housing and three units available at market rate, AAFV Executive Director Kim Deugan previously told the Idaho Press.

Article source: Idaho Press
Savannah Cardon is the Caldwell reporter for the Idaho Press. Follow her on Twitter, @savannahlcardon, or reach her at 208-465-8172.

The Idaho Council on Domestic Violence & Victim Assistance Idaho Safety & Resilience Conference (formerly Two Days in June) is scheduled for June 6th and 7th, 2019. We have been excited to collaborate with Nicole, Angela and Kimberly at the Idaho Council and are looking forward to hearing plenary speakers – Neil Websdale, PhD (he informed the Idaho Risk Assessment of Dangerousness) and Linda Chamberlain, Ph.D.

For programs attending this training, we would like to invite you to a networking dinner on Thursday, June 6th at 6:00 PM. If you or any program staff are interested, please RSVP here.

This webinar will feature closed captioning and will be recorded.

Many home visitation and early childhood staff struggle with how best to address issues of domestic violence (DV) among their clients. According to the CDC, 1 in 4 women will experience DV in their lifetime. Research has demonstrated as many as 50% of home visited low-income mothers have experienced DV. The impact of DV on parents’ and children’s physical and mental health and risk for substance use and persistent perinatal depression is well documented. Healthy Moms/Happy Babies, now in its fourth edition, is an interactive curriculum that addresses the barriers and difficulties staff experience in addressing DV. We support the field with attuned approaches to DV for survivors that were developed in concert with communities who are most affected. In this webinar, we address how personal and or vicarious trauma or abuse may impact our ability to do this work. Specific strategies and tools, both personal and organizational, will be presented to address the needs of front-line staff and managers so that they feel adequately situated to hear a positive disclosure of abuse.

Part II Date: To be determined.

Register for the webinar here.