Bernie LaSarte is the recipient of the 2017 FBI Director’s National Leadership Community Leadership Award. As the founder of the Coeur d’Alene Tribe’s STOP Violence Against Women Program, Bernie oversees efforts to prevent and respond to the cycle of violence, sexual assault, elder abuse, stalking, and bullying through education and intervention and developing partnerships within the community. The Coeur d’Alene STOP Violence Against Women Program provides critical and much-needed services for Indigenous women who experience domestic and sexual violence at rates higher than any other population. The STOP Violence Against Women Program is the only victim assistance program on the Coeur d’Alene Reservation and also offers a Domestic Violence Offender Intervention Program to reduce recidivism. Through Bernie’s leadership the program has been able to provide more cohesive and effective response to domestic violence and sexual violence. She is also an advocate for children of suspected abuse or neglect and was the driving force for the creation of the Coeur d’Alene Child Advocacy Center.

Since 1990, the FBI publicly recognizes the achievements of individuals and organizations for their contributions to crime and violence education and prevention within their communities. Bernie will travel to Washington, D.C. in April to attend a formal ceremony, which honors all DCLA recipients selected by each of the 56 FBI field offices. Congratulations to Bernie for her well-deserved recognition for her passion and community to serve survivors.

On Friday, March 23rd, the Fiscal Year 18 Omnibus Spending bill was signed by the President. We are excited to see major increases in spending on services for the prevention and response to domestic and sexual violence, with increases in the Rape Prevention & Education Program (RPE), Family Violence Prevention Services Act (FVPSA), Violence Against Women Act (VAWA) and Victims of Crime Act (VOCA).

We have been advocating with Senator Crapo’s office on several of the increases – raising the VOCA cap as well as increases in RPE, rural, tribal, and housing funding. Here are the highlights:

Unfortunately, we are extremely disappointed to see major increases in spending on ICE and other immigration enforcement programs to increase immigration enforcement, deportation, and funding for border security as well as no fix for the Dreamers (Deferred Action for Childhood Arrivals). While we applaud the increases in resources for survivors, we are disappointed that the budget fails to address the needs of vulnerable immigrant victims. Increased funding for detention beds and immigration agents while failing to allocate resources to address the end of the DACA program and TPS for thousands of individuals, and the over three-year delay in processing “U” crime-victim visas means that immigrant victims will be detained and deported at increased rates. The significant expansion of resources for immigration enforcement continues to exacerbate the fear in immigrant communities, discouraging immigrant victims from seeking help, making our communities less safe. We will continue to work with our congressional delegation to address these urgent needs.

The Women’s and Children’s Alliance (WCA) generously offered to share Denim Day materials to sister programs throughout the state. Below, WCA materials have been shared without distinguishing logos so programs may localize the materials with their information.

What is Denim Day? 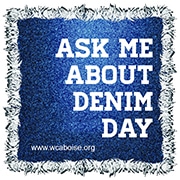 Denim Day is a day-long awareness campaign that allows us to honor survivors of sexual assault and start conversations about the dangers of victim blaming.

Why denim? In the late 90’s an 18-year-old Italian girl was sexually assaulted by her 45-year-old male driving instructor. While he was initially convicted of the crime and sent to prison, the ruling was later overturned by the Italian Supreme Court because the justices felt that because the victim wore tight jeans, she must have helped remove them thereby making the act consensual.

The following day the women of the Italian Legislature protested this decision by wearing jeans to work. As news of the decision spread, so did the protests. In 1999, an agency in Los Angeles, CA established the first Denim Day in the US—a tradition that has grown and continued since.

Thank you to the WCA for the shared materials and for their list highlighting “ways to get involved”:

Questions for how to implement Denim Day in your area? Contact the WCA Outreach Team at outreach@wcaboise.org. 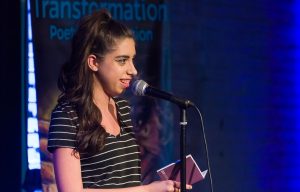 We invite students, families, and educators to help celebrate all of the winning authors from this year’s writing challenge; admission is FREE!