Gender bias is embedded in our culture. Gender bias is a more inclusive term than sexism as it includes both prejudice (attitudes) and discrimination (behavior).

Sadly, several gender bias incidents by Idaho law enforcement that have garnered media attention this year – from the Blackfoot Sheriff comments and the multiple articles by the Washington Post to the Marie Clare article on the Pocatello law enforcement charging of two women with the crime of stalking to the recent Idaho Statesman report on the Weiser law enforcement officer upset over an August encounter with three young women ages 18 and 19. The officer was shown on a video stating, “mouthy little b—–s. Oh, my f—–g God…If I can get away with it, I would’ve put a bullet in the center of each one of their heads. Bam!”

Gender bias is not unique to law enforcement. However, gender bias can have significant implications in the way girls and women are treated, such as the Pocatello woman, Jenna, 40, woke up to the sound of someone pounding on her door. The Marie Clare article reported that “an officer was there to question her about an accusation of stalking, which, according to Jenna, was unfair to begin with: After being denied medical coverage for her multiple sclerosis, she’d written two complaints to her doctor’s office, which retaliated by claiming she was stalking employees. Now here she stood, in the middle of the night, on her own doorstep, staring into the face of a police officer. “I said, ‘I’d be happy to talk with you later. This isn’t an appropriate hour, and you scared my kids,'” she recalls. “He said, ‘If you’re not going to talk to me now, you’re under arrest.’ I got arrested because I wouldn’t talk to them.”

“The way we’re socialized, we’re supposed to be nice and sweet,” Center for Gender and Justice co-director Stephanie Covington says, adding that women often get harsher sentences for the same crimes as men. “If you break that mold, that’s seen as worse for a woman than for a man.”

The U.S. Department of Justice Gender Bias Report provides guidance on addressing gender and other biases in law enforcement. The Idaho Coalition will be sending the report to Idaho’s law enforcement agencies and encouraging agencies to take steps to increase awareness and training on bias and the impact on the investigation of domestic and sexual violence case, especially the belief that sexual assaults are unfounded and failure to test of rape kits.

We need to engage in conversations on why we need to value girls and women and people who are gender nonconforming with children and parents, with school-aged youth and begin to undo the bias, assumptions, and stereotypes that result in prejudicial attitudes and discrimination – all of which are among the root causes of domestic and sexual violence.

The Attorney General’s Office has made several changes to the proposed legislation called the Idaho Charitable Asset Protection and Solicitation Act (ICAPSA) directly relating to charitable organizations and charitable trusts. Among the proposed changes are allowing the attorney general authority to pursue a director or officer who personally misuses, wastes or misappropriates his organization’s charitable assets and oversee the selling of assets when a nonprofit no longer exists.

We strongly recommend that you attend one of the regional sessions to listen and learn, ask questions, and provide valuable feedback to the Attorney General’s office regarding these changes that can have an impact on your organization if passed. Sessions are FREE and all nonprofit executives are encouraged to attend.

The Idaho Coalition will be attending the session and will provide an overview to membership on the legislative changes. 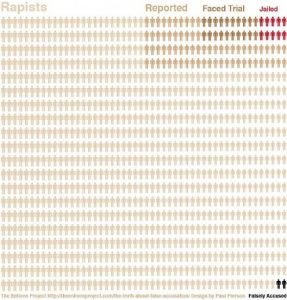 What we know from research is that one in every five women will be raped in her lifetime and one in every four women in college has been sexually assaulted. The number is even higher for women of color. According the Justice Department one in every three Native women is raped in this country, the highest rate of any racial group. It’s hard to argue with these numbers, but some still do and many claim survivors are lying. But that’s statistically almost non-existent. It’s somewhere between 2-3%.

Idaho’s recent rape kit legislation requires Idaho’s 130 law enforcement agencies to submit an audit identifying the number of unsubmitted sexual assault kits in custody and an accompanying justification for while these kits have not been submitted to the lab for testing. Under the current legislation, kits are required to be submitted unless there is 1) a determination that no crime has been committed 2) the victim requests that the kit not be submitted. Recent media reports identify that some law enforcement agencies have kits that have not been submitted for testing. The audit will determine if these kits should be submitted per the above mentioned guidelines or if the kits that do not meet the current requirements.

The Idaho Coalition is currently serving on the multi-disciplinary team that is determining the next steps with this process. As one piece of this legislation, there will soon be a secure website where individuals who have been sexually assaulted can track the status of their kit. This website is entering its final stages of development and will be launched early next year. The group is also tasked with developing a statewide protocol for the collection of the kits, establishing policies and procedures for law enforcement- including the use of trauma-informed interviewing, as well as developing statewide training for law enforcement, sexual assault nurse examiners and advocates. The group will also be creating a sexual assault victim bill or rights that will work to close some of these identified gaps.

We will continue to keep you updated on the progress of this group. As always, if you have questions or concerns, please reach out to Jennifer jennifer@engagingvoices.org or Kelly kelly@engagingvoices.org. We will also share the report that is released by the ISP Forensics Lab when it becomes available in December.

It is no surprise to those of us who work with individuals impacted by domestic violence, that this demographic has a higher-than-average rate of suicidal thoughts. Numerous studies have verified this correlation, with as many as 23 percent of survivors having attempted suicide compared to 3 percent of individuals with no prior domestic violence exposure. Adolescents experiencing dating violence are at risk as well as adults. For adolescent girls, dating violence in the past 12 months is associated with suicide attempts. Girls reporting recent dating violence were 60% more likely to report 1 or more suicide attempts in the past year. And girls experiencing physical and sexual dating violence are 8-9 times more likely to have attempted suicide in the previous year than non-abused peers.

Verbal and emotional abuse as well as physical violence are linked with an increase in suicide. Along with domestic violence, individuals who experience domestic violence may face other factors that further increase their risk: being female, low socioeconomic status, lack of resources and no employment outside of the home.

As advocates, it is vital we recognize the link between domestic violence and suicide. While survivors may disclose violence, they may not mention the hopelessness and helplessness that accompany it. Other survivors may talk about suicide but might not connect their suicide feelings with the violence they are experiencing.

If an individual you are working with is considering suicide, here are some ways you can help: 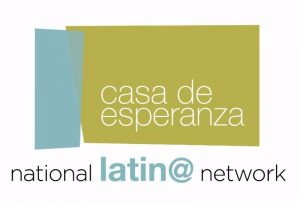 Webinar Series Standing at the Crossroads: Drawing From Our Shared Knowledge & Collective Power

Service providers, advocates, and community-based organizations have reported an increased state of concern for immigrant families and individuals who fear being targeted, detained, or deported. Join Casa de Esperanza, ASISTA, and partnering organizations during a series of webinars and conference calls that will provide advocates with useful information, draw from communal wisdom and knowledge, and highlight the collective power moving forward during times of uncertainty. 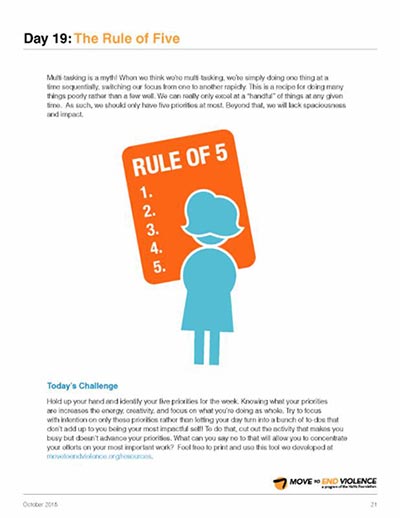 The Rule of Five

Multi-tasking is a myth! When we think we’re multi-tasking, we’re simply doing one thing at a time sequentially, switching our focus from one to another rapidly. This is a recipe for doing many things poorly rather than a few well. We can really only excel at a “handful” of things at any given time. As such, we should only have five priorities at most. Beyond that, we will lack spaciousness and impact.

Hold up your hand and identify your five priorities for the week. Knowing what your priorities are increases the energy, creativity, and focus on what you’re doing as whole. Try to focus with intention on only these priorities rather than letting your day turn into a bunch of to-dos that don’t add up to you being your most impactful self! To do that, cut out the activity that makes you busy but doesn’t advance your priorities. What can you say no to that will allow you to concentrate your efforts on your most important work? Feel free to print and use this tool developed at movetoendviolence.org/resources. 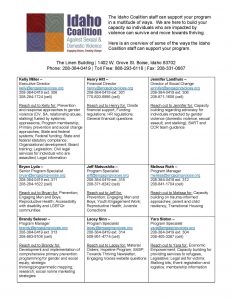 The Idaho Coalition staff can support your program in a multitude of ways. We are here to build your capacity so individuals who are impacted by violence can survive and move towards thriving.

The Quick Reference for Member Programs: Idaho Coalition Staff, is an overview of some of the ways the Idaho Coalition staff can support your program and includes individual staff contact information.